Dear Deacon John,
It’s actually a very simple thing to do – standing in silent prayer in front of an abortion center. But the reality is that we don’t get to decide the results of our presence; God does. He takes the simplicity – the littleness – of our prayers and actions and multiplies them for His greater glory. We don’t always see the fruit. In fact, we are often tempted to think we are wasting our time and are having no impact. Today’s update shows just how false those thoughts are. You may never know your impact ... but sometimes you will see the fruit – and he or she may be in pre-school or kindergarten! You may not know it until years afterward that your dedicated, prayerful hour in front of an abortion center was a sign of God’s hope to someone going in for an abortion. But when God shows you what He did, it is quite a joy to see! Here’s an example.
Peoria, Illinois
One of the 40 Days for Life volunteers in Peoria said he’d just been at the vigil for a minute or so when a woman drove into the abortion center’s parking lot – with a young child in the car.
“She pulled up right next to us,” he said, “and got out with something in her hand.”
“I just wanted to say thank you,” she said to the people who were praying. “It’s because of people like you that my son is here four years later.”
“She handed us each a cup of hot chocolate, walked back to her car and drove off,” the vigil participant said. “As she was leaving, her beautiful son in the back seat looked at us with a huge smile and waved vigorously.”
“I wish you all could have been there,” said Karen, the local campaign leader in Peoria. “Praise God!”
Fort Myers, Florida 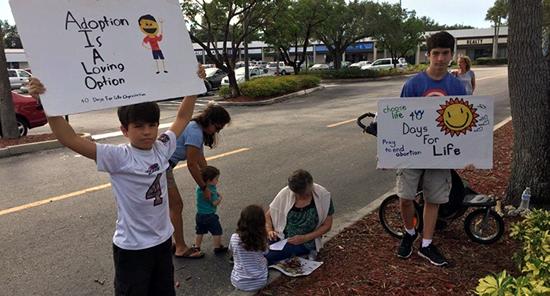 A young woman stopped her car in front of the Planned Parenthood abortion center where Angela was praying. “She wanted to encourage me to keep coming and praying,” she said.
The woman told Angela that two years ago, she had an appointment at Planned Parenthood. “She was going to get an abortion, but after seeing people praying on the street, something came over her and she changed her mind.”
This woman said she’s not really sure why she ever considered abortion. She was married, and money was not an issue. It was just her state of mind, she said. She was not thinking correctly.
“She was very happy as she now has an 18-month-old daughter,” Angela said. “She also had a conversion at that time and turned back to God.”
“Your presence outside Planned Parenthood sways hearts and minds to stop and think about God’s plan for their life and the life of their baby,” said Paula, the 40 Days for Life leader in Fort Myers. “Come and see what God can do through you!”
Cedar Rapids, Iowa 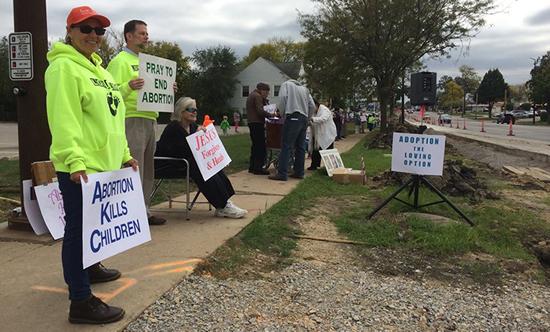 “We experienced the reason we pray outside Planned Parenthood,” said Tim Mason of Coalition for Life Iowa, “and the reason we tirelessly support the cause of life.”
A woman approached the prayer vigil outside the abortion center in Cedar Rapids and thanked the volunteers for what they do. She said that her daughter came to Planned Parenthood two years ago because of an unplanned pregnancy.
She choked up and said that because of their presence and witness outside Planned Parenthood, she had a baby granddaughter today.
“This is why we do what we do,” Tim said. “This woman’s story is worth 100,000 angry shouts and middle fingers. May God bless all of you and our cause!”
Here’s today’s devotional from Fr. Frank Pavone, national director of Priests for Life.
Day 30 intention  That those tempted to abort may understand that their child is already present, and already a real person.
Scripture And it happened, when Elizabeth heard the greeting of Mary that the babe leaped in her womb; and Elizabeth was filled with the Holy Spirit. Then she spoke out with a loud voice and said, “Blessed are you among women, and blessed is the fruit of your womb! But why is this granted to me, that the mother of my Lord should come to me? For indeed, as soon as the voice of your greeting sounded in my ears, the babe leaped in my womb for joy.” — Luke 1:41-44
Reflection
Jesus not only loves unborn children — He was one himself! Think about this for a moment. We often hear people speak of a pregnant mother by saying, “She’s expecting a child.” Now if one is expecting a package, the package is not yet there. As reflected in our verse for today, however, this is not the case with the mother. Her gift is already there. The pregnant woman, a mother already, does not have a child “on the way,” but has a child, already present and in full possession of his or her human rights, starting with the right to life.
Prayer Jesus, open my eyes to your presence in the life of every child. Open my heart to joy in the birth of every child, a birth that reflects the joy of your own birth in Bethlehem. As you shared life in the womb of Mary, so now send your protection upon every child still in the womb, and grant to their mothers the strength and joy that comes from welcoming the gift of life. We pray through Christ our Lord, Amen.
Printable devotional
To download today’s devotional as a printable PDF to share with friends:
http://40daysforlife.com/media/day30.pdf
For life,
Posted by Deacon John at 10:55 AM