Sorry for posting this so late. My Internet was down all day due to the
nasty storm we had last night.
Of the 64 abortion facilities that have closed following a 40 Days for Life campaign, many had given signs that things weren’t going so well inside. One sign is seeing moms turn around and choose life. Babies saved equals money lost to the abortion industry. Another sign is adjusting business hours ... or even closing for the day.

That has been the case in Norman, Oklahoma. There are just two abortion facilities left in the entire state. Oklahoma City’s abortion business recently closed ... and the campaign in nearby Norman expanded. I visited there this week and the enthusiastic local leader, Connie, greeted me by saying, “They’re closed today ... and this is their normal abortion day! This has never happened!” 40 Days for Life campaigns are bad for abortion businesses ... and your presence has a huge impact – more than you know!
Here’s what I’m talking about …
Flint, Michigan 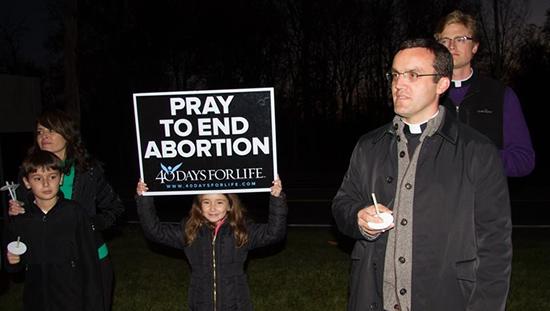 “Does anybody else experience this?” asked one of the 40 Days for Life volunteers in Flint.
“You signed up to pray one hour, and it is a rare day when the abortion facility is closed … and you are thinking you haven’t done anything tangible in that hour. Well, it never fails that two minutes before the shift is over, God sends a car.”
This particular car had a young couple in the front and three little kids in the back. The man wanted to know if that was an abortion facility, and he really wanted to talk about post-abortion effects.
He explained that he was in the army, and had seen how abortion had a profound impact on his fellow soldiers and their relationships. The volunteer offered literature that outlined types of assistance that are available to women who are pregnant.
Up until this point, the woman in the car had been silent. But she finally spoke – she was pregnant and needed that kind of help.
“I think he was trying to help that woman realize she had made the right choice,” the vigil participant said. “He was an amazing young man. I thanked them so much for choosing life. God is good all the time … especially in the last two minutes!”
Fort Collins, Colorado 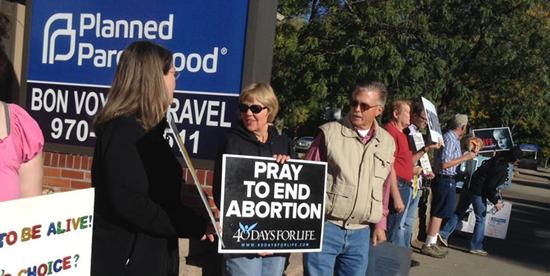 “This has not happened before,” said Linda in Fort Collins. What happened was two couples walked out of Planned Parenthood and over to the vigil participants … showing ultrasound images of their babies.
One couple told them they were keeping their baby … and the other couple just walked past with a smile and a thumbs-up.
“I am actually surprised that Planned Parenthood did the ultrasounds,” she said, noting that during this 40 Days for Life campaign, business has been off at this facility. “Where we used to count 18 to 20 on an abortion day, we now count 7 or 8.”
Cleveland, Ohio 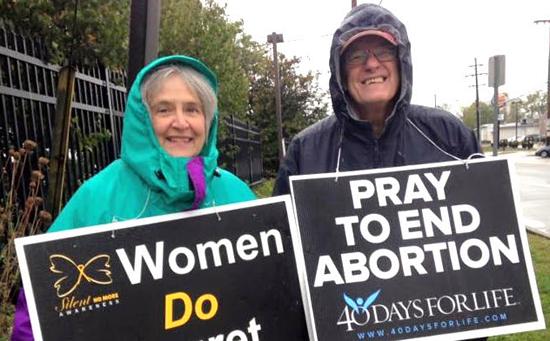 “It is with great joy that I report to you that a baby’s life was spared from abortion by the grace of God … through the efforts and prayers of several pro-lifers,” said John in Cleveland.
Three people were praying outside the abortion center when they had an opportunity to talk to a young woman – and offer her their help. She had already paid for an abortion.
“The security guard along with two employees came out to the street to discourage the mother from talking to the pro-lifers,” John said, “but despite these tactics, they persevered.
They talked for almost two hours that afternoon … and an area pastor spoke to the young woman later in the evening. The next morning, she returned to the abortion center … to collect her refund.
Here’s today’s devotional from Carmen Pate of Alliance Ministries.
Day 37 intention Pray that we will each submit ourselves this day as a living sacrifice to God, giving all that we have in us for those being sacrificed on the altar of convenience.
Scripture I beseech you therefore brethren, by the mercies of God, that you present your bodies a living sacrifice, holy, acceptable to God, which is your reasonable service. — Romans 12:1
Reflection from Carmen Pate Since all things are for His glory, we are to offer ourselves for that purpose. This of course is in sharp contrast to those who are being swayed by the enemy to sacrifice their babies on the altar of convenience, rather than choosing to surrender their all, including their unborn child, to the Lord for His purposes. A career, education goals, or even a boyfriend can unknowingly become an idol for some young women. In their minds, abortion is a convenient way to “rid themselves” of an obstacle in the way of their “worship.” In light of the sacrifice Christ made on our behalf, and the fruit of God’s mercies on our lives, we owe God our highest form of praise and worship. Presenting our bodies as living sacrifices is therefore reasonable service. We were made to worship God and God alone. The enemy who seeks worship for himself distorts God's truth regarding worship, sacrifice, idols and children. As you have given of yourself to rescue those who are perishing — the young woman and her child — you are worshiping God in the truest sense of the word. May your example lead an abortion minded client to turn from her idols to worship the one true God, sparing her child from the altar of convenience, and sparing herself from a lifetime of regret.
Prayer God Almighty, You alone are worthy of our praise and worship. Having accepted Your Son's sacrifice on my behalf, I in turn present my body to you as a living sacrifice. Thank you for deeming me holy and acceptable because of Christ's shed blood for me. I pray that you would use me as your vessel to rescue others who are perishing. Through Christ who is Our Glory, Amen.
Printable devotional To download today’s devotional as a printable PDF to share with friends: http://40daysforlife.com/media/day37.pdf
For life,
Posted by Deacon John at 5:08 PM