Dear Deacon John,
That was the message posted next to a picture of a gathering outside the abortion center in Mexico City. And we are one big, happy family! 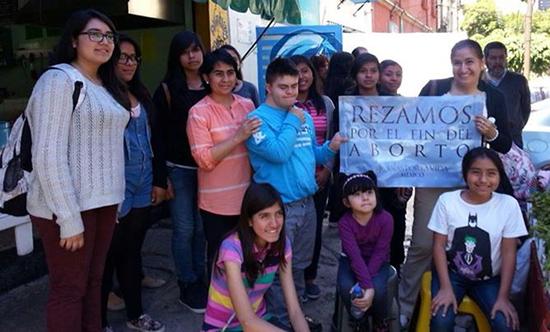 After all, despite oceans, borders and language barriers ... we have a close bond of praying for an end to abortion no matter where we live. From Mexico City, 40 Days for Life is spreading to other parts of the country and into Latin America. There are connections between Canada and Europe as well, as this “family” continues to expand. Robert Colquhoun, our international outreach director, first came across 40 Days for Life in Ottawa before he brought it back home to London. Dan and Julia knew about 40 Days for Life when they lived in Toronto … then established a campaign when they returned to their native Romania. Today we see even more transatlantic connections – a Bosnian presence at a campaign in Canada … and American visitors at a vigil in England.
Oakville, Ontario ... plus Bosnia and Croatia 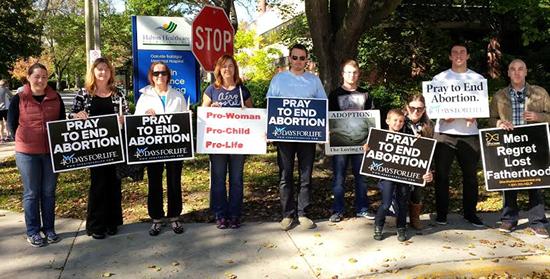 Canada celebrated Thanksgiving this past Monday … and Janet, the 40 Days for Life coordinator in Oakville, was pleased “to have dedicated prayer volunteers take time out of their Thanksgiving preparations to pray with us outside the hospital.”
Included in one group at the vigil was a young man who’d just arrived from Bosnia the night before. He knew what was going on – he had taken part in the 40 Days for Life vigil in Zagreb, Croatia, which is not too far from his home.
“We truly are part of the international 40 Days for Life community,” Janet said. “It's a wonderful affirmation of how our prayers are united all over the world!”
Schenectady, New York ... plus London 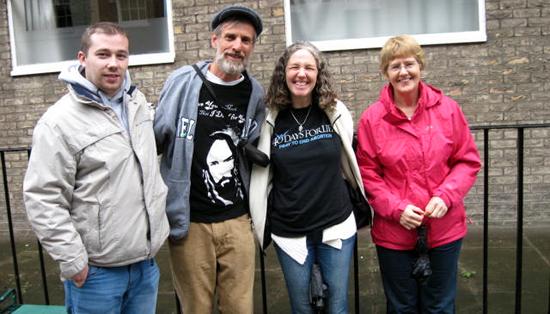 Larry says some of the “world traveling” 40 Days for Life leadership team members in Schenectady were in the United Kingdom, where they could not pass up the opportunity to pray at a 40 Days for Life vigil.
“What a blessed trip!” said Glenn, a volunteer from Schenectady.  “The highlight of this amazing three-week trip was when we prayed with the 40 Days for Life campaign in London with a Holy Family sister and two other people. We witnessed a save!”
He described how the woman who changed her mind about having an abortion was crying tears of joy as she embraced Sister Florence right outside the Marie Stopes abortion center on Whitfield Street in London.
“From across the street where we had prayed so hard for this woman, we rejoiced in the Lord who made it possible,” Glenn said. “By the way, this was our last full day in England. God saved the best for last. God is so good!”
Here’s today's devotional from Rev. J. Kirk van der Swaagh of the Conservative Congregational Christian Conference.
Day 25 intention We pray for the conversion of all those who refuse to acknowledge that human life belongs only to God.
Scripture Then the word of the Lord came to me, saying: “Before I formed you in the womb I knew you; Before you were born I sanctified you; I ordained you a prophet to the nations.” — Jeremiah 1:4-5
Reflection To be or not to be? There is no question! The question of “being” is something philosophers have long pondered. What is the meaning of being and what is the source? In the passage before us, we have our answer. We have being because we are known by God. For God to declare that he knows and sets apart the prophet Jeremiah even before he is conceived indicates that our being rests in God’s own being. Because He is and because He wills we, therefore, are and do. The Apostle Paul says as much when he declares before the philosophers of his day, “In Him we live and move and have our being” (Acts 17:28). One of the tragedies of the abortion culture is that life in the womb has been so heartbreakingly devalued. To embrace the arguments of the “pro-choice” crowd one must conclude that the child in the womb doesn't exist, isn't there, has no being. But nothing could be further from the truth. That child is known by God and, as such, has being.
Prayer Lord God, we confess that in You we live and move and have our being. Because You are, we are. May we find grace from You to affirm the being of every human and may we labor to make this truth known to the world around us. Amen.
Printable devotional To download today’s devotional as a formatted, printable PDF to share with friends: http://40daysforlife.com/media/day25.pdf
For life,
Posted by Deacon John at 12:29 PM