Dear Deacon John,
Those words are all too common inside the walls of an abortion center. When this vehicle pulls up, it sheds light on the lie that abortion is safe. 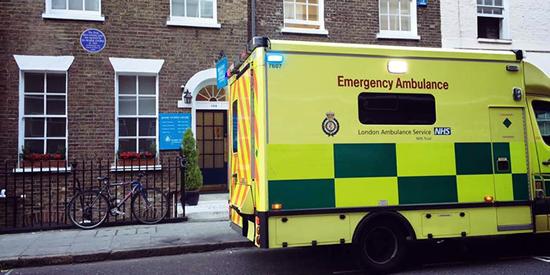 Abortion is never safe for the baby, of course. But the arrival of an ambulance outside shows that abortion can have serious physical consequences for the mother as well – and frankly we’re seeing this scene more and more. Earlier in the campaign, we reported on an ambulance call at the Planned Parenthood mega-center in Houston.
There has now been a second ambulance run in Houston – and we are aware of at least five more cases – Phoenix, Arizona; Manhattan, New York; London, England (shown above) … and two in York, Pennsylvania – a location I visited yesterday.
York, Pennsylvania 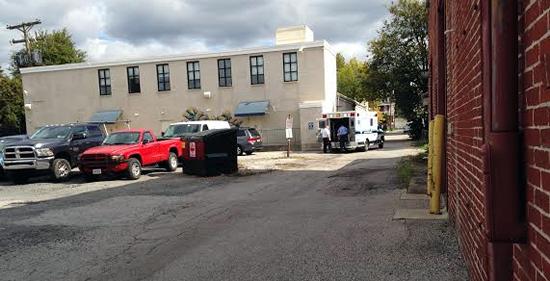 40 Days for Life volunteers in York say on October 7, there were an estimated 13 abortions performed … and a young woman was taken away in an ambulance. One week later, it was an almost identical scene, with 15 more abortions … and another young woman taken away by ambulance.
“Seeing this just makes our stomachs turn,” said Pattie and Tom, who coordinate the York campaign. “We know that abortions are going on every Wednesday, and then to see these young women taken to the hospital.”
Phoenix, Arizona

Nancy in Phoenix also relates the story of an emergency medical call at the abortion center where the 40 Days for Life vigil is taking place outside.
“An ambulance and fire truck came to Family Planning Associates when we were standing vigil,” she said. “Apparently one of their patients had a medical emergency and was taken presumably to the hospital. Please keep this person in your prayers.”
Houston, Texas

“Not much that comes out of Planned Parenthood deserves a celebration,” said Jill in Manhattan. Volunteers have seen women coming out in pain, barely able to walk down the street. Some are crying, even hysterical.
“But last week, we saw something even worse,” she said. “An ambulance pulled in front of Planned Parenthood. A young woman on a stretcher was loaded into the ambulance and driven away. Let’s keep this young woman in our prayers.”
Here’s today’s devotional from Carmen Pate of Alliance Ministries.
Day 29 intention Who is a God like You, pardoning iniquity and passing over the transgressions of the remnant of His heritage? He does not retain His anger forever, because He delights in mercy. He will again have compassion on us; and will subdue our iniquities.
Scripture “Wash yourselves, make yourselves clean; Put away the evil of your doings from before My eyes. Cease to do evil, Learn to do good; Seek justice, Rebuke the oppressor; Defend the fatherless, Plead for the widow.” — Micah 7:18-19
Reflection Micah had been sent to declare God’s judgment and call the people of Judah to repentance. The people had become spiritually and ethically corrupt. Prosperity had hardened the rich, the poor were oppressed and the heirs to David's throne were practicing abominations and idolatry. Is it not easy to see the parallels of God's people in Micah’s day and God's people today in America? Through Micah, God corrected His people by demanding justice, not burnt offerings and sacrifice. He told them to love mercy, and to walk humbly with their God. In speaking of Old Testament stories of God’s people turning from God to sin and idolatry, Paul wrote in 1 Corinthians 10: 11, "Now all these things happened to them as examples, and they were written for our admonition, upon whom the ends of the ages have come." Many biblical scholars believe God has removed His hedge of protection around our nation in response to our sins of immorality and abortion. Let us cry out in repentance for His mercy once again. And may we honor His faithfulness by doing justly, loving mercy, and walking humbly with our God.
Prayer
Heavenly Father, eternal, changeless, and faithful Lord, we recognize that we are in need of forgiveness as a nation, for turning our hearts away from you. Hear our prayer of repentance Lord and cleanse us from all unrighteousness. We praise you for your tender mercies and your compassion that never fails. Lord, it is only by Your grace that we can live lives that are just, and merciful. May Your Holy Spirit enable us to walk humbly in Your presence and may You be pleased to restore America so that a generation not yet born may praise you. In the name of Christ Jesus, who has done great things for us, Amen.
Printable devotional To download today’s devotional as a formatted, printable PDF to share with friends: http://40daysforlife.com/media/day29.pdf
For life,
Posted by Deacon John at 12:36 PM