From 40 Days For Life: DAY 34: Counting the miracles

Dear Deacon John,
Ready for some great news? Well … here it is!
As we enter the final week of this 40 Days for Life campaign, our local leaders are reporting …
… 412 babies spared from abortion (that we know of)!
You offer up your simple prayers to the Lord … and He responds with love and mercy. Here are just a few examples of His hand at work in this campaign.
Louisville, Kentucky 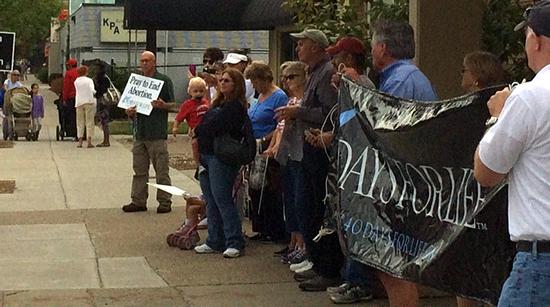 “Miracles are happening!” said Laura in Louisville. “Volunteers witnessed the following and wanted to share it.”
While vigil participants were praying outside the abortion center, a woman came out and walked over to speak to them … telling them she had decided not to abort her baby.
“I saw a sign that someone was holding,” she said, “and realized I just couldn’t do it!”
“Praise God!” Laura said. “Because people answered His call and were standing there, serving as a witness … this woman decided to save the life of her baby!”
Pittsburgh, Pennsylvania 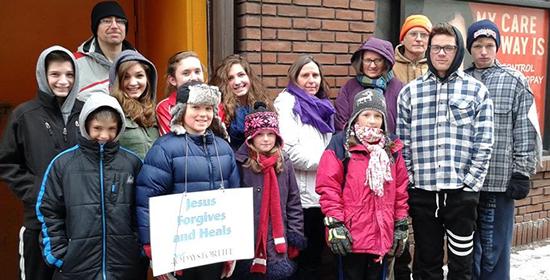 “Praise God that a young woman turned away from Planned Parenthood,” said Nikki, the local 40 Days for Life coordinator in Pittsburgh. “A life may have been saved.”
One of the vigil participants was able to take this young woman from Planned Parenthood’s doorstep to two life-affirming resources centers.
“Please pray for her,” Nikki said. “She is 9 weeks pregnant and homeless.” She had spent the night in the bus station, as she had nowhere to sleep.
“All afternoon, our sidewalk team scrambled to find a shelter for her, but they were unable,” Nikki said.
One of the volunteers offered a room at her home for the weekend, until a more permanent arrangement could be found – just another example of the strong commitment of the pro-life community!
Columbia, Missouri 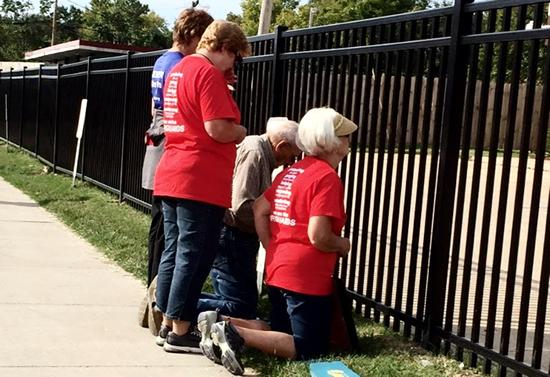 “We were blessed to see that God saved three babies on one day,” said Kathy, the local 40 Days for Life leader in Columbia. The volunteers learned of one of the saves when a young mom told the sidewalk advocate, “I’m not having the abortion. I just couldn’t do it.”
“A couple had gone in an hour earlier,” Kathy said, “and one of the more tenacious escorts barked for the young mom not to talk with me or take my information. They came out later and in the driveway, I was able to engage with her. Praise God! He saved three little ones today!” Kathy noted that there were many children on the sidewalk. “One family brought four and one mom brought two little girls,” she said. “Another prayer supporter brought balloons which bounced back and forth in the strong wind all morning.”
Mankato, Minnesota 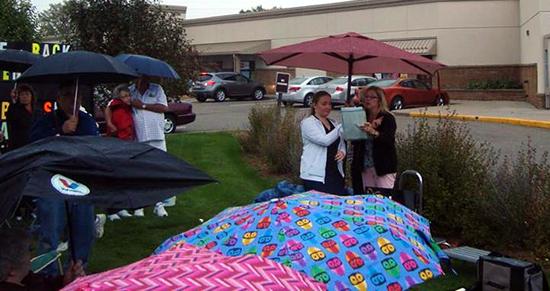 A baby was saved … thanks to the prayers of the volunteers at Mankato’s 40 Days for Life vigil.
The word came from a woman who stopped to talk to prayer volunteers, asking them to deliver a message to the two people who’d been praying outside the abortion center earlier that day.
Her daughter had an abortion appointment; but she told the vigil participants that “God heard their prayers – and my daughter changed her heart and decided to make an appointment with her ob/gyn instead.”
“Praise God!” said one of the Mankato volunteers. “God cannot be outdone in His generosity.”
Here’s today’s devotional from Rev. Paul Stallsworth, president of Lifewatch (United Methodist Church).
Day 34 intention May we come to know that divine life, in relationship, creates human life.
Scripture In the beginning was the Word, and the Word was with God, and the Word was God. He was in the beginning with God. All things were made through Him, and without Him nothing was made that was made. —John 1:1-3
Reflection from Rev. Paul Stallsworth “In the beginning” was God. Always, before all times, there was God. This particular God – the God of the Bible, the God of St. John’s Gospel – is different from all other gods. This God is alive and full of life. This God is not the picture of deadness and death, aloneness and isolation. This God is the picture of life, relationship, and unity. For within this God, within this one God, there are three divine persons who live, who love, and who work – together. This is the glorious mystery of the Trinity. The Trinity means divine life. The Trinity means three, living Persons – Father, Son, and Holy Spirit – who relate to each other. The Trinity means mutual love and service among three Persons. The Word was always with God the Father. This Word was, is, and will be the Trinity’s second person. The Word is also the Son of God or, as revealed in time, Jesus Christ. God the Father and God the Son live, love, and work for each other. As one, they create “all things” together: the Father creates all things, including all human life, through the Son. So the Father, through the Son, creates all human lives. The little one swimming in his mother’s womb, the infant smiling in his father’s arms, the child crying in pain in a hospital bed, the energetic teen running another mile, the old man gasping for his last breath – all were created, at their beginning, by the Father through the Son. No exceptions. Divine life creates human life.
Prayer O God, may we always be quick to call you Father. And when we call you father, let your Spirit remind us that we, and all people, from their beginning to their last day, are your children. We praise you, Father, that you sent your Son to reveal to the world that all people are His brothers and sisters, that all people are your children. Through Jesus Christ we pray, Amen.
Printable devotional To download today’s devotional as a printable PDF to share with friends: http://40daysforlife.com/media/day34.pdf
For life,
Posted by Deacon John at 12:09 PM