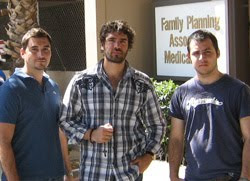 "The threat to innocent life isn't limited to the poorest nations. We need to be vigilant in promoting the dignity, beauty and incomparable worth of every human person right where we are." -- Eduardo Verástegui, Manto de Guadalupe

LOS ANGELES, May 20 /Christian Newswire/ -- Actor, producer and human rights advocate Eduardo Verástegui is hosting the first- ever Latino United for Life Family Congress on Sunday, May 23, 2010, from 8 a.m. -- 7 p.m. at the Los Angeles Convention Center.

The United for Life congress is a project of Manto de Guadalupe, an international aid organization that promotes human dignity throughout the world and brings relief to those suffering extreme poverty. Manto de Guadalupe's includes building homes, delivering food and medicine, and providing lifesaving assistance to impoverished pregnant women.

"The funds raised through our United for Life Family Congress will be used to open a medical center in Los Angeles that provides free, high-quality care for pregnant women and their preborn babies," stated Eduardo Verástegui, referencing a goal of the first- ever event.

"The Guadalupe Medical Center will be located in an area that has 10 abortion facilities. Therefore, our center will be an oasis of life in the midst of a desert of death," Verástegui observed. "Just as Latinos have had their dignity undermined by negative stereotypes in the media, so too have preborn babies had their dignity denied since the controversial 1973 Roe v. Wade Supreme Court decision. It is the mission of Manto de Guadalupe to promote the dignity of the human person with a special focus on restoring honor and dignity to Latinos--from the child in her father's arms to the child in her mother's womb, from the embryo to the elderly."

The line-up of entertainers includes singers Emmanuel and Alexander Acha, Mariachi Sol de Mexico, impersonator Gilberto Gless, and actress Karyme Lozano. Speakers include former Planned Parenthood director Abby Johnson and the vibrant young Australian actor Nick Vujicic. Vujicic was born without limbs, but inspires people throughout the world with his powerful witness to the goodness, dignity and beauty of life. He and Verástegui co-starred in the award- winning short film, The Butterfly Circus.

Jason Jones, founder of the Human rights Education and Relief Organization (HERO), will speak as well. Verástegui and Jones have collaborated on many missions promoting the dignity and beauty of the human person, including bringing a message of hope and redemption to prison inmates in Texas and delivering lifesaving supplies to the poor in Darfur, Sudan.

"The threat to innocent life isn't limited to the poorest nations. We need to be vigilant in promoting the dignity and incomparable worth of every human person right where we are," stated Verástegui. "Join us at the United for Life family congress. Unity equals strength and strength is the power behind positive change."