WASHINGTON, May 10 /Christian Newswire/ -- Randall Terry will debut his new TV Show, "Randall Terry: The Voice of Resistance," on Monday May 10 at 6 PM Eastern time on www.terrycast.com and www.CPNLive.com . It will also air on two TV stations, on in Tennessee and one in Florida. 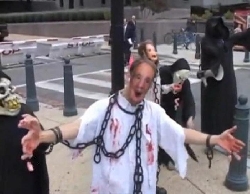 Photo: Frame from teaser and comedy clips of "Randall Terry: The Voice of Resistance."

Randall Terry states: "Leading 'cyber refugees' from the 'cyber ghetto,' and getting people away from their televisions, and into the culture wars - that is the mission of the show.

"The show will be a combination of news, comedy, songs, skits, and of course...leadership training for culture warriors. Think of a hybrid of Stephen Colbert, Rush, and John the Baptist. And of course, we will torment our adversaries, just because we can.

"What will hopefully make this show different from other shows, is that we don't just talk about news, we make it; we don't just whine and complain; we fight, and we teach others to fight."

Here are some comments received from those who have seen previews of the show:

"Clearly a man to be taken seriously in our national dialogue."

"Glenn Beck... Sean Hannity.... Mike Huckabee, EAT YOUR HEARTS OUT! Randy shows how to do it with street theatre and panache."

View teaser and comedy clips of upcoming "Randall Terry: The Voice of Resistance."