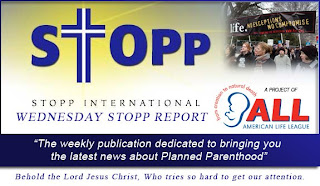 WASHINGTON, May 12 /Christian Newswire/ -- The following is released by the American Life League:

WHO:
The purpose of American Life League's STOPP project is really quite simple: To cause such discontent with Planned Parenthood programs that it will have no choice but to close its doors and get out of town.

American Life League was cofounded in 1979 by Judie Brown. It is the largest grassroots Catholic pro-life organization in the United States and is committed to the protection of all innocent human beings from the moment of creation to natural death. For more information or press inquiries, please contact Katie Walker at540.659.4942 or kwalker@all.org.