Are Anti-Religious Censors behind Fracas in Norfolk, Virginia over the 'Fetus Doll' ? 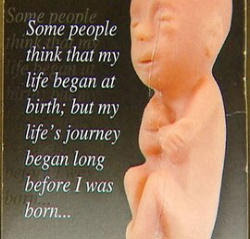 the real question that should be asked - once the dust has settled - is why the reaction happened at all ...and who was behind it?

The dolls which caused this fracas are an accurate representation of our youngest neighbors in the first home of the whole human race. They are scientifically accurate, not at all offensive and profoundly educational. They are also not a "religious" statement.They are a human statement. So, why are they causing such an uproar and who is behind it? There is a Cultural contest underway for the future of the West. It involves two conflicting visions of the human person.