Demonstration against Elena Kagan as Supreme Court Nominee, Thursday, May 13, 8 - 9am 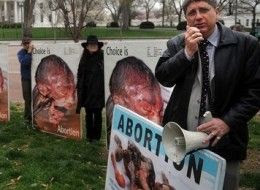 Randall Terry and local Insurrecta Nex members will protest Elena Kagan as Supreme Court nominee in front of the Senate Dirksen Building (corner of First and C NE) on Thursday May 13, from 8 - 9 am. They will call on the Republicans in the Senate to filibuster Kagan for her support of Roe v. Wade.

"We are urging Republicans and pro-life Democrat Senators: filibuster Kagan. Stop paying lip service to unborn babies and the pro-life movement, and put up a real fight to overturn Roe vs. Wade. Your true colors will be displayed by how you vote on Kagan." -- Randall Terry, Insurrecta Nex

What: Demonstration calling on Republicans and Democrat Pro-life Senators to filibuster Elena Kagan.

Where: outside the Dirksen Senate Building, corner of First and C, NE

Who: Randall Terry and local members of the Insurrecta Nex team

Why: If she were appointed to the Supreme Court, Elena Kagan would uphold Roe and keep child-killing legal during her tenure

"If these Senators don't fight to stop Kagan, it shows that they are either hypocrites or cowards - or both.

"They say they are pro-life, it's time they live up to their rhetoric.

"Elena Kagan believes the 14th Amendment gives a woman the right to kill her offspring; this is judicial insanity."