55 abortion centers have done this

Dear Deacon John,
We now know of 55 abortion centers that have closed their doors and left town in locations where 40 Days for Life prayer vigils have been held!   Will your city be next? If you're ready ... apply now to lead 40 Days for Life in your community!
http://40daysforlife.com/apply    The 55th abortion center to go out of business following a 40 Days for Life vigil is SurgiCenter in Cleveland, Ohio. After eight campaigns were conducted outside that facility, prayers have been answered. To God be the glory!   And that’s not the only good news!   Just last week, a Planned Parenthood abortion referral office in Hanover, Pennsylvania announced it is shutting its doors. Six 40 Days for Life campaigns were held outside. 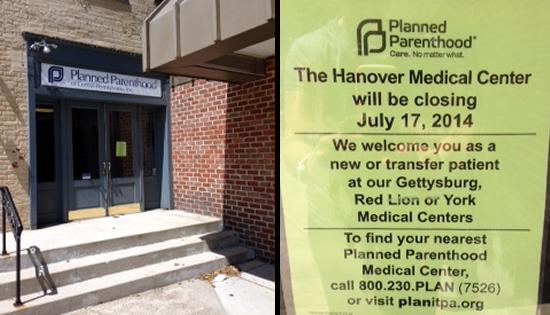 And we’ve just learned that a Planned Parenthood center in Warsaw, Indiana is scheduled to close next week. There have been five 40 Days for Life vigils there.   These referral center closures answer a common question: "Why hold a 40 Days for Life vigil outside a place that doesn't actually do abortions?" Planned Parenthood — which receives half a billion dollars annually in taxpayer funding — does more than 300,000 abortions every year in the United States. For many of their customers, the first stop is an abortion referral center.
According to former workers at these locations, the referral centers counsel for and even schedule the abortion appointments at Planned Parenthood's surgical abortion centers.   A 40 Days for Life vigil at one of these locations reaches abortion-minded women in your own town. It shows them that people are praying for them ... and offering better, life-affirming alternatives.     The bottom line is that with these latest closures, Planned Parenthood now has fewer places where it can attempt to sell abortions.   So if there’s a Planned Parenthood office in your city – or any other center that refers women to other locations for abortions – then yes, that is a great place to hold a 40 Days for Life vigil.   Want to apply to lead a 40 Days for Life campaign from September 24 to November 2? Then apply now!
http://40daysforlife.com/apply
Applications will remain open until next Tuesday, July 22.   Still thinking about it? Still have questions? Then join me and other members of the 40 Days for Life headquarters team for a live teleconference tomorrow.
Here are the details:   What:       Teleconference with 40 Days for Life headquarters team Date:         Thursday, July 17 Time:        1 pm Eastern time Where:     http://InstantTeleseminar.com/?eventID=57647676 How:         Telephone or webcast – it’s your choice!   You can go to that web link above and ask your question in advance – we’ll get to it on the event itself. Don’t miss this opportunity to find out more!   If you need to know more about leading a 40 Days for Life campaign … I’ll talk to you tomorrow!
For Life,
PS: Again, I just want to be sure you know that the applications are only for leading a campaign. You don’t need to apply to pray at the vigil or help out in any other way.
Posted by Deacon John at 5:32 PM