Dear Deacon John,
The 40 Days for Life campaigns in the United Kingdom continue to get media attention. However, much of it is less than complimentary. Even the headlines reflect the abortion industry’s claim that vigil participants “harass” their clients. Of course, a picture is worth a thousand words – and the pictures always show the harassment claim is a pure fabrication. Robert Colquhoun, our international outreach director, takes a look at a couple of UK campaigns today. London, England First of all, here’s a brief video report on behalf of the 40 Days for Life vigil in London’s Ealing section. This is a very successful campaign which is led by Iulia, who came to London from Romania.
To see the video, click the image below: 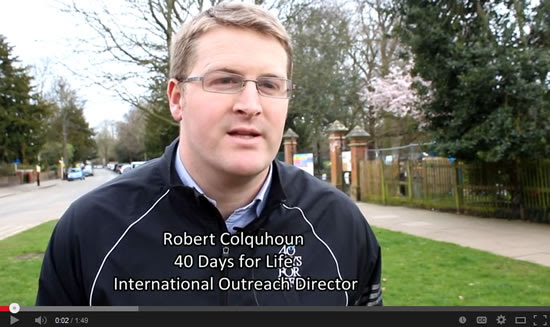 Or you may go to: http://40daysforlife.com/blog/?p=5875  The vigil takes place outside an abortion business located in a building that formerly served as a Christian house of healing, which is why there is still an image of the archangel Michael on the outside wall. The campaign has witnessed 19 children spared from abortion thus far. One of those mothers told counsellors that she was moved to seek their advice after seeing people kneeling in prayer opposite the Marie Stopes abortion facility. “The couple is Christian and in a very difficult financial situation,” Iulia told me. “I talked to them for one hour, telling them about the help we offer … but they could not believe me, as no one has ever helped them. They were very touched by the thought that someone they’ve never seen before could love them so much!” 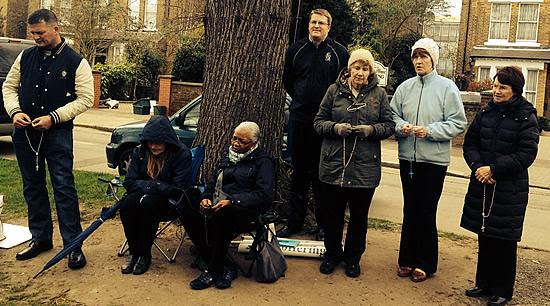 Another vigil participant spoke of an older woman who approached with a plastic bag. From this bag, she took out handfuls of white cherry blossom petals, and scattered them near the abortion facility’s entrance. “She knelt down, said a prayer, and quietly left without a single glance,” the volunteer said. “It lasted all of two minutes, but her actions spoke volumes.” Cardiff, Wales 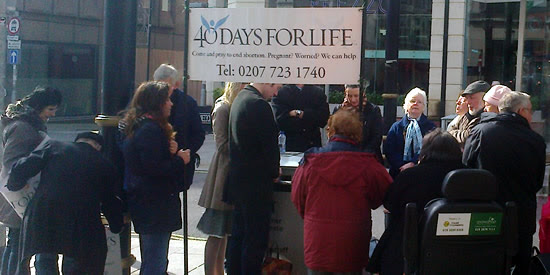 The Cardiff campaign has faced more than its share of opposition, both on the pavement and in the media. A couple of stories from their local press showed what the volunteers must contend with. One article featured the headline, “Pro-life campaign accused of harassing women as they visit Cardiff abortion clinic.” But the photo accompanying the story showed a more accurate picture of the vigil, as about a half dozen volunteers stood in a peaceful circle of prayer. The same newspaper featured a commentary called “Those who stand in judgement should take a look at themselves.” The writer actually put these words into print: “Each lunchtime I find myself resisting the urge to lob my sandwiches at them, or simply shout in their self-righteous faces, ‘WHY?’” This is a sign the prayer volunteers are doing excellent work, when you have silly articles in the secular press. They are a solid campaign!
Thanks to Robert Colquhoun for today's international update!
Today's devotional is from Fr. Frank Pavone, national director of Priests for Life. Day 37 intention We are the defenders of true freedom. May our witness unveil the deception of the "pro-choice" slogan. Scripture Now the Lord is the Spirit; and where the Spirit of the Lord is, there is liberty. — 2 Corinthians 3:17 Reflection by Fr. Frank Pavone Norma McCorvey (the former Jane Roe of Roe v. Wade) used to work at an abortion mill named "A Choice for Women." She now realizes what a cruel irony that title was. She saw first hand, just as pregnancy resource center counselors see, that women don't get abortions because of freedom of choice, but rather because they feel they have no freedom and no choice. They feel trapped, abandoned, desperate and afraid, and have been led to believe that abortion is their only option. As Frederica Mathewes-Green has written, no want wants an abortion like she wants a Porsche or an ice cream; rather, she wants it like an animal caught in a trap wants to gnaw off its own leg. "Where the Spirit of the Lord is, there is liberty." That doesn't mean that the Spirit allows us to do whatever we want or to decide for ourselves what's right and wrong. Rather, it means that the Spirit gives us the freedom to do what is right, the power to choose what is good, when we see it before us and yet feel pulled in the opposite direction. Liberty means that we no longer have to feel doomed to do what we know is wrong. We are the people of the Spirit of the Lord, and when we take action on behalf of life, especially by being present at abortion mills, we are acting on behalf of true freedom, and imparting to those who are in bondage the power to do what is right. Prayer Come, Holy Spirit. You are the Spirit of freedom, the source of all that is good, the power to do what is right. Fill us, and fill those who are in bondage today, feeling doomed to do what is wrong. Set them free, and help us to hasten them on the road to freedom, where your grace overcomes every temptation. We ask this through Christ our Lord, Amen. Printable devotional To download today's devotional as a formatted, printable PDF to share: http://40daysforlife.com/docs/spring2014day37print.pdf
For Life,
PS: I'm really enjoying your stories of local 40 Days for Life campaigns posted on the 40 Days for Life blog. If you have news to share, please reply to today's entry at: http://40daysforlife.com/blog/?p=5875
Posted by Deacon John at 10:27 AM