Dear Deacon John,
Orlando is known for Walt Disney World and other entertainment attractions. But the city has its poor neighborhoods as well ... and one of them is home to a large Planned Parenthood abortion facility. I visited the Orlando campaign this week, where 150 people attended their mid-point event — including one woman who came to angrily protest the event … but ended up thanking us for being there. That is just one of the moving stories from my visit to Orlando … and my stop in Springfield, Illinois. Orlando, Florida

Travel issues prevented me from arriving for the Orlando kickoff rally – so I rescheduled my visit. I was moved by the efforts of Irene, the local leader, and her team. Attendees included the directors of three local pregnancy resource centers. There was music, prayer and joy – and Planned Parenthood staffers listened to the talks just a few yards away. One of the pregnancy centers had even brought an RV, fully equipped with an ultrasound machine! I met a volunteer who brings her son, who has Down syndrome, to Planned Parenthood to pray weekly. She said, "He is such a powerful witness that every life is sacred, when so many want to disregard those with disabilities.
"When we come here to pray, it is like jumping into the water to save a drowning child," she said. "We are honored to do it. Where else can you save a life just by showing up and being a witness to God's love?" 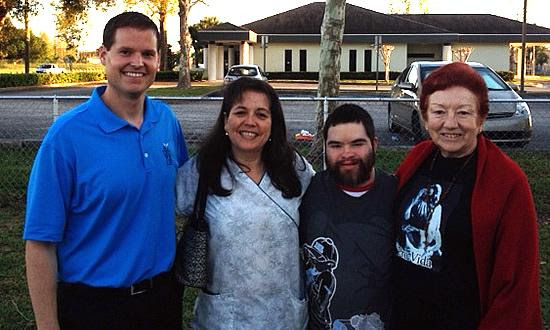 The event drew one counter-protester. But at the end of the evening, she came over and put down her sign, saying she had misjudged our intentions. She thought we were there to judge women. But she soon realized that the campaign is driven by love and compassion – and it saves lives. Irene gave her some information and invited her to pray on the sidewalk. The woman had spoken to a member of the Knights of Columbus, whose explanation helped her realize that 40 Days for Life was something she could support. “If it saves one baby,” she said, “it is worth it!” Springfield, Illinois 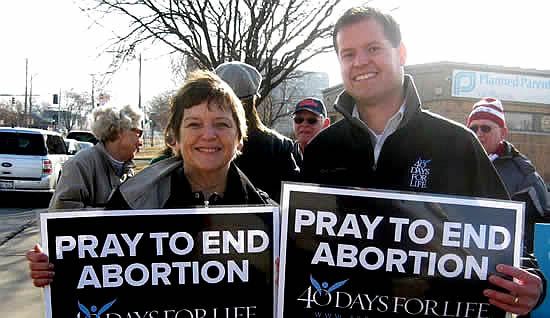 After speaking at a pregnancy center banquet, I went to visit the 40 Days for Life team in Springfield, Illinois. The Planned Parenthood center in Springfield does RU 486 abortions ... just a few blocks from the Abraham Lincoln presidential library. I was inspired by the local leader, Andrea, who also works for Springfield Right to Life. “I’ve been involved in Right to Life for 30 years and 40 Days for Life is the most important thing we can be doing,” she said. Andrea has led four campaigns in Springfield because “it puts prayer first — and that’s what we need.”
Today's devotional is from Randolph Sly of the National Pro-life Religious Council. Day 16 intention May the mystery of the Incarnation increase our zeal for defending life. Scripture Then the angel said to her, "Do not be afraid, Mary, for you have found favor with God. And behold, you will conceive in your womb and bring forth a Son, and shall call His name Jesus. He will be great, and will be called the Son of the Highest; and the Lord God will give Him the throne of His father David. And He will reign over the house of Jacob forever, and of His kingdom there will be no end." — Luke 1:30-33 Reflection by Randolph Sly
"God has assumed Humanity, joining it with Divinity, and kindled in men's hearts new love of me." These words were written by a Roman poet in the Fourth Century. He spent his life finding ways to express the greatest mystery of the world: the incarnation, in which God became man. The womb has been referred to as the "first home of the whole human race." It is the place where life begins, where our stories start. In the womb the great men and women of history began their magnificent march through life. In the womb Divinity met humanity, and God the Son was born into the world. As one of the Fathers of the early church, St. Leo the Great, declared, "Within her spotless womb Wisdom built itself a house and the Word became flesh." I was at the hospital for the birth of my fourth grandchild. Looking through the nursery window at the rows of newly born babies, I began to think of the great stories that would be written about these tiny lives. During his visitation with the Virgin Mary, the angel prophesied to Mary about the life of her child. Here in this hospital, I pondered, what would he say about each of these? Would they meet the one who also came from His mother's womb to redeem the world and kindle our hearts afresh for God? I thanked God for each baby alive and prayed for each story yet to be written. Prayer Heavenly Father, you have made the womb of each woman a very special place. Help us to hold fast to the sanctity of this first home of humanity, remembering the wonderful mystery, that God inhabited the womb of a young woman and came forth as the savior and deliverer of the world. We ask this in the Name of the one who came forth, Jesus Christ our Lord, Amen. Printable devotional To download today's devotional as a formatted, printable PDF to share: http://40daysforlife.com/docs/spring2014day16print.pdf
For Life,
PS: What's new at 40 Days for Life in your community? Please share any blessings by replying to today's blog entry: http://40daysforlife.com/blog/?p=5558
Posted by Deacon John at 11:14 AM