Dear Deacon John,
There are stories of God’s blessings and God’s victories at 40 Days for Life vigils. But there are also stories of pain. There are hearts that are hurting in this battle to end abortion, and they all need your prayers. As you pray this Sunday, particularly at church, please ask the Lord to share His grace with those who are suffering … and that He will provide the spiritual healing they so desperately need – and can find only in Christ.
Sacramento, California

While people prayed in the rain at the 40 Days for Life vigil in Sacramento, Wynette – the local coordinator – watched a scene unfold outside the abortion center. “Several abortion business employees huddled together, holding their umbrellas, as they took turns hugging one abortion worker in particular,” she said … wondering what was going on.
A few minutes later, that worker exited the driveway right in front of Wynette and rolled down the car window, ignoring the falling rain.     "I've had enough!” the distraught worker called out. “I hate this place! I quit!”   “I cannot say much more,” Wynette said ... but she added that the worker asked for prayer. 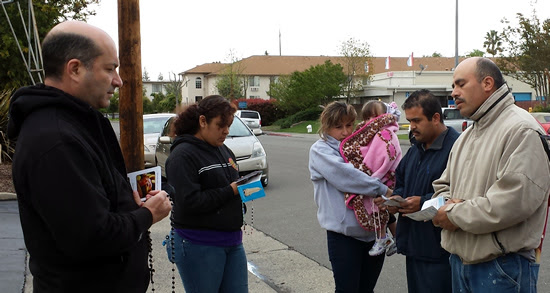 She encouraged prayer “for all abortion industry employees, in hopes that they would discontinue their involvement in destroying lives and hurting women.
"I've been there"
One of the prayer volunteers (I'm keeping the location confidential) tried her level best to convince a young couple to reject abortion and spare their baby.
She poured her heart out. But the pair walked into the abortion center and kept their appointment, and the vigil participant was overcome with a profound sense of failure. “She came to us totally sobbing,” said the local leader. “You could see her soul with so much pain.” Once she was able to speak, she told the other members of the team that she had an abortion — “not only once. I had four abortions and helped two other women get abortions. That makes six. This is too much — too much pain I’m bearing.” One of the other volunteers knew the feeling – all too well. “I’ve been there,” she said, as she began to minister to the other woman. This vigil participant acknowledged that she’d had an abortion, but had experienced recovery and found forgiveness. The volunteers shared information about healing after abortion with their friend, who was still in tears. “We were able to pray with her and her healing began,” the leader said. Still, the woman felt the need to return to the vigil.
“I just want to save a baby,” she said. Today's devotional is from Fr. Frank Pavone, national director of Priests for Life. Day 26 intention Pray that we fully recognize in the unborn child our brother, our sister, and we recommit ourselves to care for them. Scripture Cain said to his brother Abel, "Let's go out to the field." And while they were in the field, Cain attacked his brother Abel and killed him. Then the Lord said to Cain, "Where is your brother Abel?" "I don't know," he replied. "Am I my brother's keeper?" The Lord said, "What have you done? Listen! Your brother's blood cries out to me from the ground." — Genesis 4:8-10 Reflection by Fr. Frank Pavone After Cain committed the first murder in human history, God asked him, "Where is your brother?" He replied by saying, "I don't know." In 1973, the Supreme Court was asked the same question, and gave the same answer. Unable to admit that the unborn children are our brothers and sisters, the Supreme Court said in its Roe v. Wade ruling, "We need not resolve the difficult question of when life begins." Boil all that down to three words, and it's, "I don't know." The question, "Where is your brother?" will be asked at the final judgment. Each person will answer it and be judged by it. May we be judged to have recognized and loved all our brothers and sisters, born and unborn. By participating in the 40 Days for Life, we have been answering that question each day, going to where our brothers and sisters are killed, and proclaiming that we have a responsibility to them. By all the pro-life work we will continue to do, we likewise answer that question which reaches from one end of human history to the other. Prayer Father, today we hear your voice, and we respond to the question you ask each of us: "Where is your brother?" We recognize in the unborn child our brother, our sister, and we recommit ourselves today to care for them. Yes, Father, you have entrusted us to the care of one another. We rejoice that you have given us the grace to respond. As we work to renew our culture, we look forward to the great day of the coming of your Son, when every eye will see him, even of those who pierced him, and every knee shall bend, and every tongue confess, to the glory of God the Father, that Jesus Christ is Lord! Amen. Printable devotional To download today's devotional as a formatted, printable PDF to share: http://40daysforlife.com/docs/spring2014day26print.pdf
For Life,
PS: Are there special people in your town who are making a difference with your 40 Days for Life campaign? Please share the good news by replying to today's blog entry: http://40daysforlife.com/blog/?p=5678
Posted by Deacon John at 9:54 AM