From 40 Days For Life: DAY 8: Breaking the language barrier

Dear Deacon John,
Little did we know that God would ever take 40 Days for Life international! Now, under the leadership and courage of Robert Colquhoun, this campaign is breaking language barriers and, through God's grace, saving lives.   Here’s a report from Robert, who is based in London and serves as our international outreach director. He recently got a first-hand look at the first-ever 40 Days for Life campaign in Croatia.
Zagreb, Croatia

I was really blessed to visit Zagreb for Thursday and Friday last week, and was amazed by their campaign. The following video shows the determination and courage of many individuals in their community who are committed to their campaign.
In four minutes, the video shows the power of 40 Days for Life. The majority is in Croatian, of course (with the exception of a brief portion around the one minute mark where they interviewed me), but you don’t need to speak the language to see the faith and the passion of the people who came to pray.
Click on the image below to watch the video: 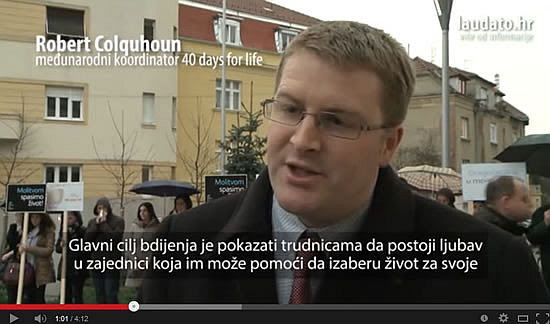 Or you may go to:
http://40daysforlife.com/blog/?p=5400
Ante, the local coordinator who is featured in the video, is an impressive leader. He is assisted by a large and well-organised main committee. 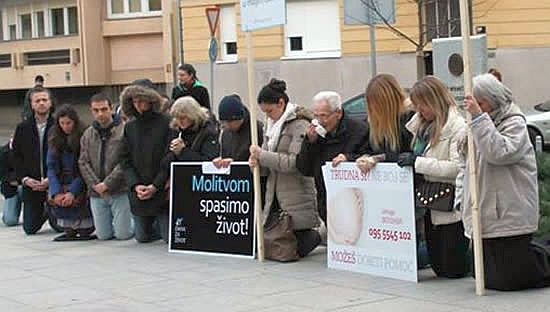 Croatia, which was formerly part of Yugoslavia, has a population of 4 million. There is a big opportunity for growth for pro-life groups in the country.
Birmingham, England
Birmingham is a well-established campaign, in its sixth incarnation this time — and they are doing great work.
Archbishop Bernard Longley came to the first day of the 40 Days for Life campaign in Birmingham to lead an hour of prayer. He had prayed at the vigil last year as well – and in fact there was a turnaround while he was there. 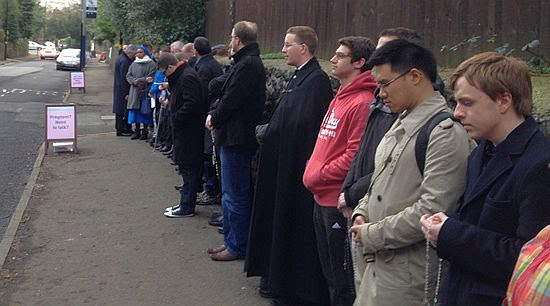 As the archbishop left, a car drew up with a woman and her child. The woman asked Isabel, the local leader, what was going on. “So I spent a long time explaining why we were there and how we helped women who were suffering after abortions to find healing,” Isabel said
The woman listened intently, and tears welled up in her eyes as she said, “I just wish you'd been here four years ago. Things would be different then.” Fortunately, the volunteers were able to direct her to post-abortion care.
Thanks again to Robert Colquhoun for today’s report!
Today's devotional is from Rev. Rob Schenck, president of Faith and Action. Day 8 intention We pray for a renewal of our zeal to offer generous help to the unborn and their families. Scripture If I have despised the cause of my male or female servant when they complained against me, what then shall I do when God rises up? When He punishes, how shall I answer Him? Did not He who made me in the womb make them? Did not the same One fashion us in the womb? — Job 31:13-15 Reflection by Rev. Rob Schenck The ground is level as we stand before God. Job lived with an awe provoking sense of God's expectation of him, particularly regarding his obligation to care for the weak and needy. He knew that in God's economy everyone stands on level ground when it comes to our status as God's creatures. Because of that central truth, we must take care of each other. Job also knew that he didn't deserve any of the good things God gave to him. Instead, those blessings came to Job from God's benevolent heart. As an extension of that knowledge, Job instinctively linked his obligation to be generous to others to God's kindness toward him. As in Jesus' parable of the unmerciful servant (Matthew 18:23-35), Job knew that it is an egregious sin to deny to others what we enjoy ourselves. He actually calls down on his own head severe condemnation and even punishment should he fail to share with others out of his own abundance (see verses 16-23). Proverbs 3:27 reads, "Withhold not good from them to whom it is due, when it is in the power of your hand to do so." Some things are so obvious that we don't even need to pray except to ask of God forgiveness and the power to do what so obviously needs doing. Prayer God, forgive us when we try to explain away the obligation we have to help others who need help. Enable us to not devalue them because they are in the circumstance that they are in, but to see them for what they are, those, who like us, were formed by your hand in their mother's womb. Amen. Printable devotional To download today's devotional as a formatted, printable PDF to share: http://40daysforlife.com/docs/spring2014day08print.pdf As we begin the second week of this 40 Days for Life, let's pray that God continues to pour out His rich blessings on everyone involved!
For Life,
PS: If you have good news to report about 40 Days for Life in your community, please post a comment on today's blog entry: http://40daysforlife.com/blog/?p=5400
Posted by Deacon John at 10:57 AM