Dear Deacon John,
Today, we are reminded that anyone can change their mind at the last moment before an abortion. And if we face any discomfort in going out to pray outside the abortion center, it’s worth it to give a mom or a dad a chance to choose life. When they do, we are sometimes surprised. But we must trust that the voice of God will be heard and responded to in that moment. Here are two examples of that happening … from two different countries. Colorado Springs, Colorado 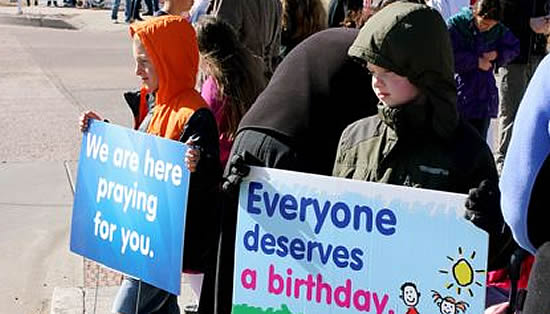 It wasn’t hard to see the excitement in Michele’s note from Colorado Springs: “Another baby saved!!!!” Yes, four exclamations! But that’s always great to hear. “I have some more amazing news,” she added. “I learned that another baby was saved last Friday. So there were two on the same day!” All of this is happening at a place where the weather has often been, as Michele put it, “yucky.” 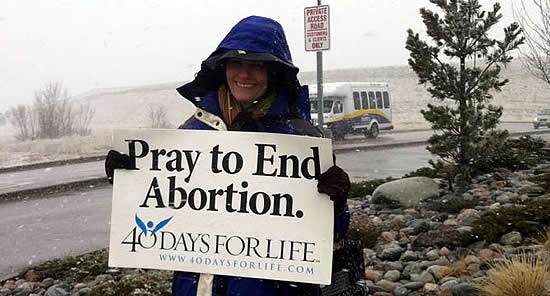 When a group from Immaculate Conception Church was praying outside the abortion center, a couple pulled over near the stop sign and talked to a vigil participant for quite a while. The conversation went on for a bit, and the couple said they were going in to have an abortion. “The volunteer gave them some information and told them the truth about their baby,” Michele said. The young man then turned to the woman and said, “We can’t do this” – and they left! Michele noted that the sight of sincere, determined, steadfast Christians standing in prayer in uncomfortable weather often makes abortion-minded women stop and think – and choose life for their babies. Campbell River, British Columbia

Campbell River is a community on Vancouver Island, which is along Canada’s Pacific coast. The city is taking part in 40 Days for Life for the first time, and the vigil is being conducted outside a hospital. “We heard great news last Wednesday of a woman that was supposed to have an abortion but did not go through with it,” said Vanessa, the local coordinator in Campbell River. “We heard this through inside info — from a doctor and nurse at the hospital.”

Volunteers have been able to speak with women – and men – who have suffered emotionally because of their experiences with abortion. “We are really praying that many post-abortive women along with men find healing in Christ and become front-runners for the fight against abortion in this city and nation,” she said. “Please continue to pray that God would do a mighty, great work in this city of Campbell River and that many would choose life instead of death.”
Today's devotional is from Carmen Pate of Alliance Ministries. Day 22 intention Pray for fathers who participated in the decision to abort their child, and for those who did not have a voice, that they would find freedom and healing in Christ. Scripture If indeed you have heard Him, as the truth is in Jesus: that you put off, concerning your former conduct, the old man which grows corrupt according to the deceitful lusts, and be renewed in the spirit of your mind, and that you put on the new man which was created according to God, in true righteousness and holiness. — Ephesians 4: 21-23 Reflection by Carmen Pate According to the Guttmacher Institute, one-third of American women will have had an abortion by age 45. Seldom reported however is the fact that an equally significant number of men have played a role in terminating a pregnancy. Some have participated through persuasion, or by providing the financial means for the abortion. Still others were against an abortion, but had no sway in the decision to terminate their child. Only in recent years have we realized that men suffer from their loss, as more and more seek healing. Warren Williams, founder of Fathers and Brothers Ministries says he believes men are coming forward for help because God instilled in men a desire to be a protector of their lineage, a provider for their families, to be a husband and father. Men are suffering and grieving the loss of their children, and though their grief may be expressed differently than that of a woman, it is grief nonetheless and they too need tender care and biblical counseling to experience forgiveness and healing. Intervention at the appropriate time in the decision-making process may spare both the young man and woman from the lifelong pain and trauma of abortion. Biblical counseling for post-abortive men and women is essential for them to heal and begin their life anew in Christ. Prayer Dear Heavenly Father, We pray for young men who participated in the termination of their child and are broken as You are over their loss. Forgive their sin, Lord, and bring opportunity for healing and renewal of their minds in Christ Jesus. For those suffering from an abortion they did not choose, restore their joy as they learn to forgive others and trust You with their future. In the name of Christ, who heals the brokenhearted, Amen. Printable devotional To download today's devotional as a formatted, printable PDF to share: http://40daysforlife.com/docs/spring2014day22print.pdf
For Life,
PS: Please share news of your local community by posting a reply to today's blog entry at:
http://40daysforlife.com/blog/?p=5636
Posted by Deacon John at 9:54 AM